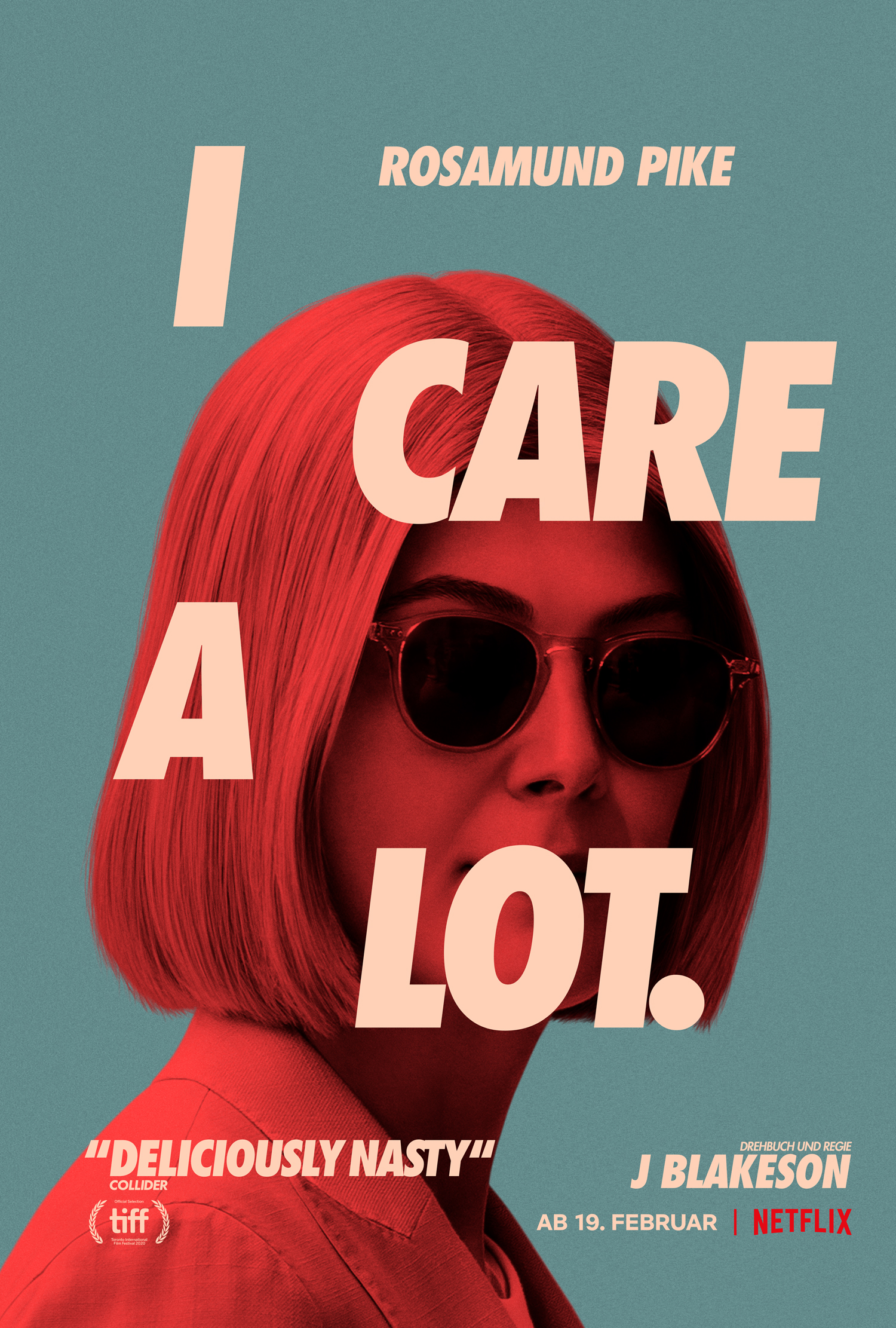 “I Care A Lot” which in my opinion is a poor choice as a title for the movie-especially when she uses it to justify what she does, which is whenever she gets the chance to (I enjoyed everything else about it) operates on the premise that there are no good people; at least that is what anti-hero, sociopath and scam artist Marla Grayson (a cold blooded Rosamund Pike) says in a voice over at the start of the film, and for the most part this is true-at least for this movie. Which has no protagonists, just a cunning, selfish, and well-dressed Pike.

Marla Grayson is a scheming sociopath who preys on the elderly. She operates as a court appointed guardian for senior citizens, who are deemed by a doctor (Marla’s accomplice) and a judge as unable to care for themselves. Marla swoops in and takes her “wards” in a care facility, she then goes on to liquidate her ward’s assets, from selling their possessions to draining their finances for her own self-interest.

It’s a far from perfect modus, not when some of these elderly still have living relatives, who are still entitled to whatever assets are left, once said elderly, err, kicks the bucket. Marla would have to give the remaining assets to the inheritors and just like that, she’s down one ‘cash cow’. This is the nail to her almost perfect scheme, which is why it is understandable when Marla jumps at the opportunity at a “cherry” – the ideal and perfect ward in Jennifer Peterson (Dianne Wiest) a single, wealthy and from what their investigations show, elderly lady with no relatives, who lives all alone in a quaint and beautiful home, adorned with many expensive trinkets.
Like a lioness on the hunt for her prey, Marla sets out on taking the cherry for herself with the help of her partner Fran (Eiza Gonzalez) they quickly take Jennifer from her lovely home and place her in the elderly facility, which is more than happy to follow Marla’s demands and requests.
Turns out that this “cherry” has actually a lot of strings attached, as the trailer reveals, Jennifer actually has some very powerful and influential friends, led by a scary and smoothie-drinking Peter Dinklage who are willing to go to great lengths to “rescue” Jennifer from the facility.

This becomes an interesting point to tackle in the film, as Peter Dinklage, in a very different role from Tyrion Lannister (Game of Thrones) but I think one that he really just had fun with and enjoyed and his “associates” aren’t exactly in good standing with the government, making their rescue efforts more complicated. On the one hand, we have Marla, who is on the side of the government but who has found a loop-hole in the justice system. She operates with the protection of the law, but that doesn’t mean that she has Jennifer’s interests in mind.

See, no “good” people in the movie. It really is hard to root for anyone in particular, so you just sit back and enjoy the show, even if it can turn your stomach from time to time, knowing that there is elder abuse being done, I mean, its so bad it’s just like stealing candy from a baby! The worse part? This actually happens in real life! Check out Netflix’s ‘Dirty Money’ documentary series that has an episode that tackles the tragic world of guardianship scams.

Film fans are familiar with Pike’s thrilling and chilling performance of Amy Dune in 2014’s ‘Gone Girl’ well, let’s just say she carries that same chilling energy as Marla Grayson, only this time, she’s really bad and she knows it. Dressed to win all the time, in pristine suits and immaculate sneakers, she doesn’t take ‘no’ for answer, no matter what. If you enjoyed Rosamund Pike as Amy Dune, you should not miss her performance as Marla Grayson.
One of the 2021 films I thoroughly enjoyed throughout, I found the use of electronic music fresh and really brought out a new intensity in a number of sequences.

As mentioned in the title, this is a parable, one with a lesson, that too much power, comes at a price, especially when it means destroying lives to serve your self-interest.

“I Care A Lot” -streams on Netflix on February 19.