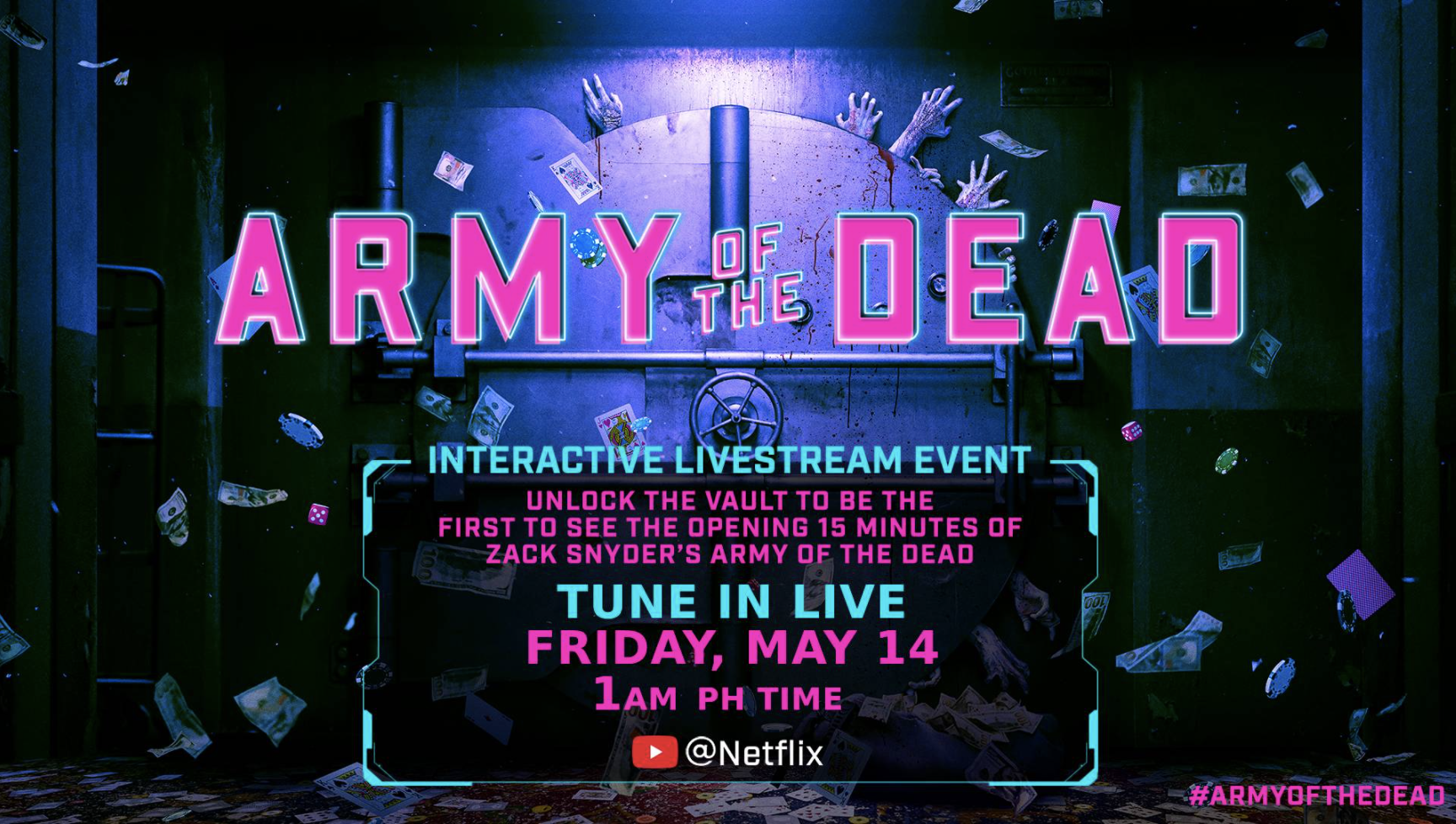 ARMY OF THE DEAD | INTERACTIVE LIVESTREAM EVENT | TUNE IN LIVE

On Friday, May 14, Netflix will host a global livestream event only on the Netflix YouTube channel. Fans can tune-in live for this interactive experience to be part of unlocking the first 15 Minutes of Zack Snyder’s eagerly-anticipated Netflix Film, Army of the Dead.

Featuring special appearances by director Zack Snyder and stars Dave Bautista, Ella Purnell, Omari Hardwick, Ana De La Reguera, Matthias Schweighöfer, Nora Arnezeder, Tig Notaro and more, this live reveal will have fans (literally) digging for a sneak peek of Zack Snyder’s zombie heist flick. Once unlocked, audiences will have a 32 hour window to watch the unforgettable beginning of Army of the Dead on the Netflix YouTube channel, the same amount of time that Scott Ward (Dave Bautista) and his crew have to break into zombie-infested Las Vegas to retrieve the $200 million sitting in a vault beneath the strip before the city is nuked.

Army of the Dead will premiere on May 21 on Netflix.

ABOUT ARMY OF THE DEAD

From filmmaker Zack Snyder (300, Zack Snyder’s Justice League), ARMY OF THE DEAD takes place following a zombie outbreak that has left Las Vegas in ruins and walled off from the rest of the world. When Scott Ward (Dave Bautista), a displaced Vegas local, former zombie war hero who’s now flipping burgers on the outskirts of the town he now calls home, is approached by casino boss Bly Tanaka (Hiroyuki Sanada), it’s with the ultimate proposition: Break into the zombie-infested quarantine zone to retrieve $200 million sitting in a vault beneath the strip before the city is nuked by the government in 32 hours. Driven by the hope that the payoff could help pave the way to a reconciliation with his estranged daughter Kate (Ella Purnell), Ward takes on the challenge, assembling a ragtag team of experts for the heist. They include Maria Cruz (Ana de la Reguera), an ace mechanic and Ward’s old friend; Vanderohe (Omari Hardwick), a zombie killing machine; Marianne Peters (Tig Notaro), a cynical helicopter pilot; Mikey Guzman (Raúl Castillo), a go-for-broke influencer and Chambers (Samantha Win), his ride-or-die; Martin (Garret Dillahunt), the casino’s head of security; a badass warrior known as the Coyote (Nora Arnezeder) who recruits Burt Cummings (Theo Rossi), a slimy security guard; and a brilliant German safe cracker named Dieter (Matthias Schweighöfer). Scott finds an unexpected emotional hurdle when Kate joins the expedition to search for Geeta (Huma S. Qureshi), a mother who’s gone missing inside the city. With a ticking clock, a notoriously impenetrable vault, and a smarter, faster horde of Alpha zombies closing in, only one thing’s for certain in the greatest heist ever attempted: survivors take all.

Tags: Army Of The Dead, Netflix