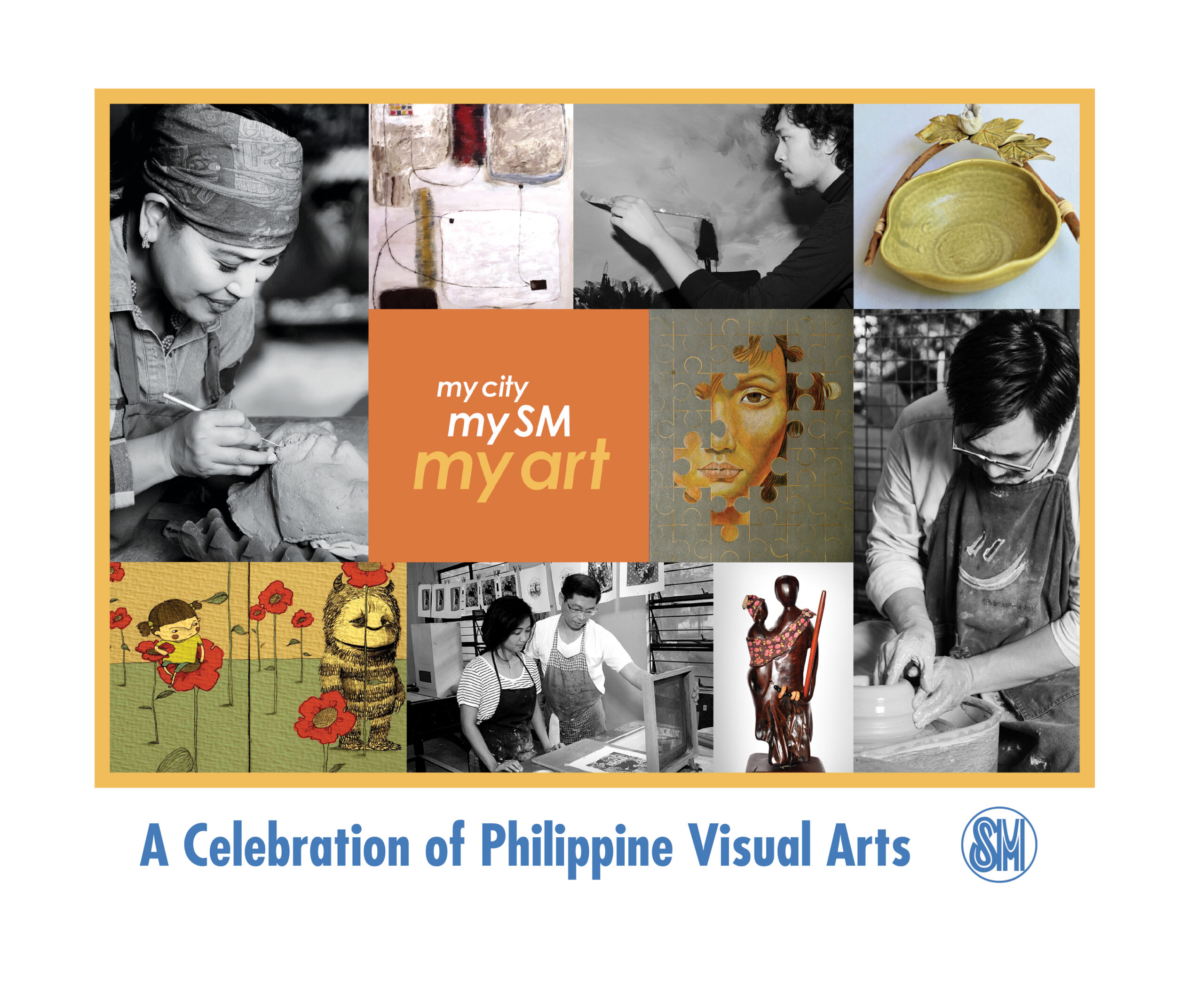 My City, My SM, My Art, which recently launched its book just in time for the National Arts Month, is the latest edition in the My City, My SM series, which celebrates the beauty, culture, traditions, and great people in cities around the Philippines where SM has malls.

My City, My SM, My Art celebrates Philippine visual arts – painting, sculpture, printmaking, photography, and filmmaking. It aims to bring people and art together in a roadshow featuring the works of masters, modernists, and millennials around the SM Supermalls.

Our cultural journey began on March 2016 at SM Seaside City in Cebu with an exhibit featuring artists from the Queen City of the South including maestro Romulo Galicano; and concluded on March 2019 at SM City Cebu with the masterpieces of Manuel Rodriguez, Sr., the Father of Philippine Printmaking leading the way.

In between, our search for art and artists brought us as far north as the Baguio and the Cordilleras and as far south as General Santos in Mindanao. During those three years, we advocated art for all by working closely with communities, schools, and the public to mount exhibits, workshops, and contests in key cities around the Philippines. These were featured in the Philippine Star, our project partner, as well as in local media, and a cultural series in regional cable channels.

To make all these possible, we collaborated with the National Commission for Culture and the Arts, the Metropolitan Museum of Manila, and the Shell Companies of the Philippines; as well as the Philippine Star, Center Stage Productions, and Finale Art File.

Along the way, we were able to have a glimpse of what makes Philippine art unique, and how close family ties, ingenuity, and a sense of community have played key roles in its development.

We have seen how Filipino art has flourished through families like the Abellanas of Cebu; as well as those of masters Mauro Malang Santos, Jose Pitok Blanco, and Eduardo Castrillo whose children – and in some cases grandchildren – now represent a new generation visual artists. There are also wonderful examples of how art ties fathers and sons together – National Artist Abdulmari Imao and Toym, National Living Treasure Eduardo Mutuc and Eduardo, Jr., Ricarte Puruganan and Victor, Manuel Baldemor and Monnar, Romulo Olazo and Jonathan.

We were also amazed at how Filipino artists created groundbreaking works from non-traditional materials. With art supplies either too costly or simply unavailable, Baguio’s Jordan Mang-osan and Patric Palasi found their niche in solar and coffee art, respectively; while Palawan’s Elordie Mesac crafted his pieces from rubber slippers. When his materials were washed away by super-typhoon Yolanda, Tacloban-born Dante Enage began using tuba, a local wine made from coconut juice, as his medium.

We also saw how art thrived when artists got together in collectives like the Tam-Awan Village in Baguio, the Artist’s Village in Baler, and Pinto Art Museum in Rizal.

Now, after three years, more than 30 stops, hundreds of artworks, and a myriad of memorable experiences, we have compiled our exciting cultural journey in a book. Join us as we unravel the exquisite tapestry of Philippine art through the lives and works of some of the country’s most fascinating visual artists.

A two-part movie has been confirmed for Haikyuu!! The "Haikyuu Final!!" announcement came with this visual and is set to be released August 2023. 🏐 ...

Pinoy creatives join Webtoon's 'Call to Action' contest! Here's how to support them!Click on the link to read more! ...

David Hontiveros is a familiar name in the local comic book industry, a Palanca Award Winner, he is also part [...]
View on Facebook
· Share

Never Have I Ever Season 3 is now streaming on Netflix 💋 in case you need a refresher here's a vlog review/discussion for Season 2! ✨ Please subscribe! ✨youtu.be/556FjK2pD2Q ...

Never Have I Ever Season 2 Review Discussion

Check it out! Its my review/discussion for Season 2 of NEVER HAVE I EVER which drops on Netflix tom! Loved the first season so I was thrilled to get to revie...

Are you ready to meet these ladies next week? Marvel Studios’ #SheHulk: Attorney at Law is streaming August 18 on Disney+ 💚 ...